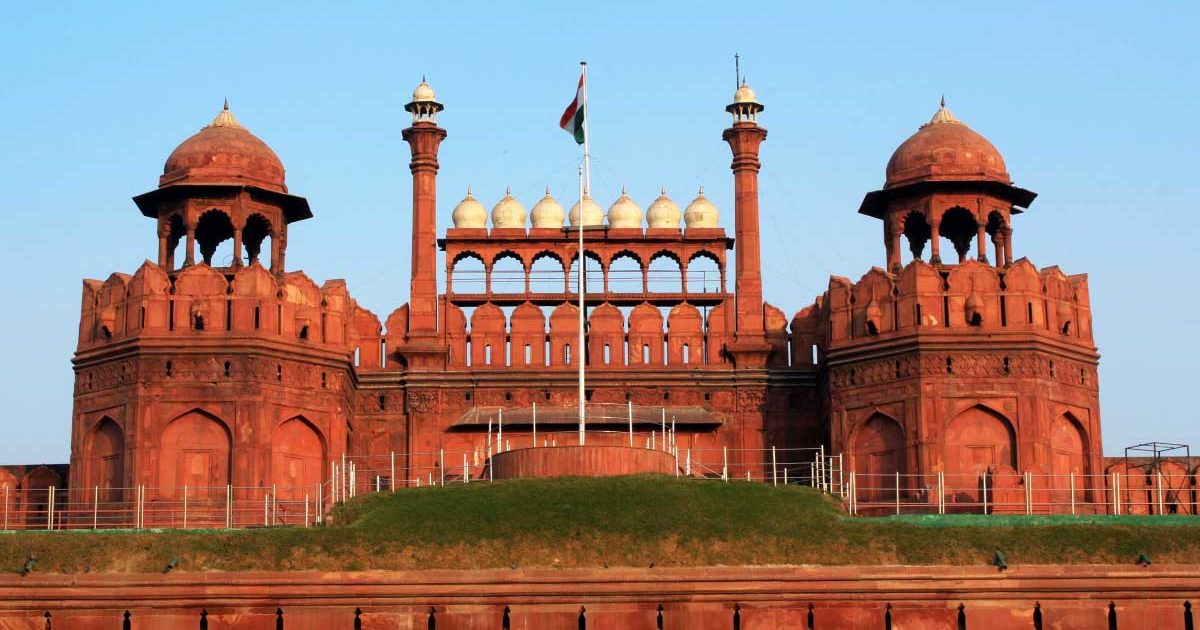 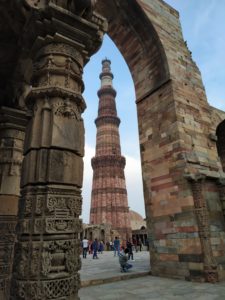 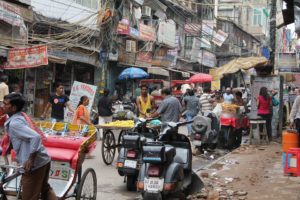 Old Delhi: Old Delhi was built by the fifth Mughal Emperor Shah Jahan, builder of the Taj Mahal. Within this area of enclosed streets, mosques, tombs and bazaars, are the Red Fort and the famous mosque, Jama Masjid. In succession of buildings, palaces, pavillions and halls of public and private audience within, are silent witnesses of a by gone grandeur. 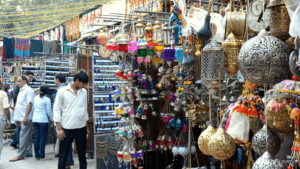 Chandni Chowk: The main street of Old Delhi is the colourful shopping bazaar known as Chandni Chowk. At the East end of the Chandni Chowk and North of the Jama Masjid , there is a Jain Temple with a small marble courtyard surrounded by a colonnade. The West end of Chandni Chowk is marked by the Fatehpuri Mosque which was erected in 1650 by one of Shah Jahan’s wives.

Lahore Gate: The main gate to the fort takes its name from the fact that it faces towards Lahore, now in Pakistan. If one spot could be said to be the emotional and symbolic heart of the modern Indian nation, the Lahore Gate of the Red Fort is probably it. After independence, many important political speeches were given by Nehru and Indira Gandhi to crowds amassed on the maidan outside and on Independence Day each year, the Prime Minister addresses a huge crowd. 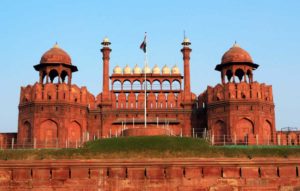 Red Fort: While we talk about tourists attractions in Delhi. The name of grand Red Fort surely comes among others. This magnificent fort was built by one of the greatest Mughal Emperor Shah Jehan in 1618. This grand fort was inaugurated in 1647 with a gala celebration. The fort was decorated with rich wall-hanging, silks from China and velvet from Turkey. This magnificent fort is built in red sandstone, so the fort is known as Red Fort. The red sandstone walls of Lal Qila, the Red Fort, extend for two km and vary in height from 18 metres on the river side to 33 metres on the city side. The Red Fort dates from the very peak of Mughal power.

Diwan – I – Am: The Hall of Public Audiences was where the emperor would sit to hear complaints or disputes from his subjects. His alcove in the wall was marble- panelled and set with precious stones, many of which were looted following the Mutiny. This elegant hall was restored by Lord Curzon, the Viceroy of India between 1898 and 1905.

Diwan- I –Khas: The Hall of Private Audiences, built in white marble, was the luxurious chamber where the Emperor would hold private meetings.Centrepiece of the hall was the Peacock Throne. In 1760, the Marathas also removed the silver ceiling from the hall, so today it is a pale shadow of its former glory.

Moti Masjid: Built in 1659 by Aurangzeb for his own personal use, the small and totally enclosed Pearl Mosque, made of marble.

Jama Masjid: The great mosque of Old Delhi is both the largest in India and the final architectural extravagance of Shah Jahan. It has three great gateways constructed of alternating vertical strips of red sandstone and white marble. The courtyard of the mosque has a capacity of 25,000 people.

Chor Bizarre’s Memory Lanes: Walk into Delhi’s Past. Savour the sights, smells and sounds of the fabled streets of Old Delhi with a seasoned “Dilliwallah” – your Walk Leader. These walking tours full of anecdotes and legends, unfold tales of Old Delhi which go back thousands of years. The leisurely pace, well- charted routes and the readiness of your Walk Leader to answer all your questions makes this tour more personal than commercial. 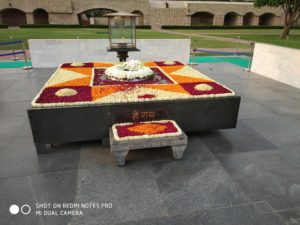 New Delhi: New Delhi was conceptualized in 1911 during the Coronation Durbar held in 1931. Its most outstanding structures are the Rashtrapathi Bhawan, Parliament House, Connaught Place and the India Gate. 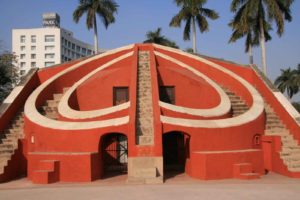 Jantar Mantar: Jantar Mantar is an observatory. It is also the must visiting site in Delhi. It appears like a gallery of modern art. It was built by Sawai Jai Singh II of Jaipur.

India Gate: India Gate is the most popular landmark of Delhi, India. Perhaps your tours to Delhi will be incomplete without paying a visit to imposing India Gate. India Gate is a war memorial in the memory of soldiers who laid their lives for the sake of the country during the First World War. This 42 metre high stone arch of triumph stands at the eastern end of the Rajpath. It bears the name of 85,000 Indian Army soldiers who died in the campaigns of First World War, the North – West Frontier operations of the same and the 1919 Afghan fiasco. 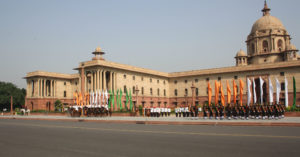 President House: When you will in Delhi, India don’t miss to pay a visit to President House. It is also the major landmarks of Delhi City. This palace was formerly the Viceregal Lodge. It is located in an area of 130 hectare. There are 340 rooms inside the Rashtrapati Bhawan. It is the official residence of the President of India stands at the opposite end of the Rajpath from India Gate. Completed in 1929, the palace like building is a blend of Mughal and Western architectural styles.

Sansad Bhawan: Sansad Bhawan , the Indian Parliament building is a circular colonnaded structure 171 metres in diametre. Permits to visit the parliament and sit in the public gallery are available from the reception office on Raisina Road but you will need a letter from your embassy.

Purana Quila (Old Fort): This is the proposed the supposed site of Indraprastha, the original city of Delhi. The fort has massive walls and three gateways. There’s a small archeological museum just inside the gate, and there are good views of New Delhi from atop the gate. It is said that this fort was constructed on the historic site of Indraprastha by Humayun and Sher Shah.

Humayun’s Tomb: This is also the famous landmark of Delhi. It was built by emperor’s mournful widow, Haji Begum in 1565 AD, senior wife of Humayun, this is an early example of Mughal architecture. The architecture of Humayun’s Tomb is very impressive. This remarkable structure is built in red sandstone any beautified with stunning architecture. The elements in its design – a squat building , lighted by high arched entrances, topped by a bulbous dome and surrounded by formal gardens – were to be refined over the years to the magnificence of the Taj Mahal.

Nizamuddin: Across the road from Humayun’s Tomb is the shrine of the Sufi Saint Nizamud-din Chisti. His shrine , with its large tank, is one of several interesting tombs here.It is worth visiting the shrine at around sunset on Thursdays, as it is a popular time for worship and qawwali singers start performing after the evening prayers.

Lodi Gardens: In these well – kept gardens are the tombs of Sayyid and Lodi rulers.

Safdarjung Tomb:
It was built in 1753-54 by the Nawab of Avadh for Safdarjung, is one of the last examples of Mughal architecture before the final remnants of the great empire collapsed. Nawab Shauja-ud-Daula was a minister in the Mughal Court. 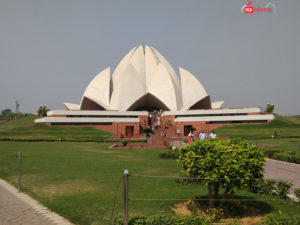 Bahai Temple / Lotus Temple: Lying to the East of the Siri is the Lotus shaped building. Built in 1980 and 1986, it is set amongst pools and gardens and adherents of any faith and free to visit the temple and pray or meditate silently according to their own religion. 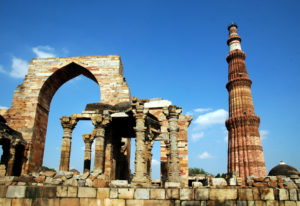 Qutub Minar: Qutub Minar is one of the major landmarks of Delhi. The construction of this towering minaret was commenced in 1200 AD by Qutab-Ud-Din Aibak, the first Muslim ruler of Delhi. Qutab could only finish the basement of this tower. His descendant, Iltutmush, added three more storeys to this minar. Firoz Shah Tughlak finished the construction by adding fifth and last storey in 1368. Don’t miss to visit this wonderful structure during your tours to Delhi. 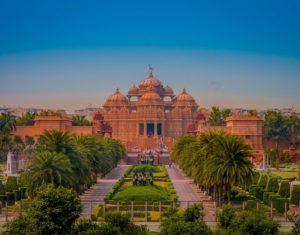