Located at the foothills of the Aravalli Range, the city of sunrise, Udaipur lies in southern Rajasthan near the Gujarat and Madhya Pradesh borders.
Udaipur History
Udaipur was once the capital of Rajput kingdom of Mewar. It was ruled by Ranawats of Sisodia clan. The earliest capital of Udaipur (that time Mewar) was Chittorgarh or Chittor. Chittorgarh is located on the bank of Banas River northeast of Udaipur. The city has produced a number of patriots and heroes in the state whose fame are still alive.
The city of sunrise, Udaipur was founded by Maharana Udai Singh after the fall of Chittorgarh to Mughal Emperor Akbar. According to legend, Maharana Udai Singh founded the city on the advice of a hermit. Udaipur remained untouched from Mughals in every aspect.
Udaipur a Travel Destination
Resting on the bank of breathtakingly beautiful Pichola Lake, the city of sunrise, Udaipur is popularly described as with many names like City of Sunrise, City of Dawn, City of Lakes, Romantic City or Venice of the East. The reason behind calling it city of lakes is the city is dotted with some picturesque lakes. These lakes, such as Pichola Lake, Fateh Sagar Lake, Swaroop Sagar Lake, and Udai Sagar Lake, are considered to be the awesome and most beautiful lakes of Rajasthan, India. At Fateh Sagar Lake you will see two islands. One island has Udaipur Solar Observatory and the other one has Nehru Garden – breathtakingly beautiful garden. While you will go to visit to Pichola Lake, you will also see here magnificent island palaces, Jag Niwas & Jag Mandir. The outstanding Lake Palace is located in the middle of Lake Pichola.
Apart from lovely lakes, the city of Udaipur is also dotted with outstanding forts, elegant palaces, amazing temples and lovely colorful markets. The city of Udaipur is also famous for its exotic fairs & festivals. One of the importing facts about Udaipur is the city is considered to be the one of the most romantic cities of the world. While you are in tours to Udaipur, Rajasthan, India, don’t miss to take and enjoy a boat ride over the romantic water of breathtakingly beautiful lake – Lake Pichola. Come and explore the awesome attractions of Romantic City – Udaipur in Rajasthan, India with Royal Indian Tour.
Udaipur Attractions: 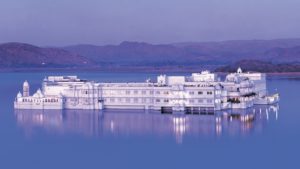 Lake Palace: The Lake Palace (also known as Jag Niwas) is one of the most enthralling tourist attractions of Udaipur, Rajasthan, India. It is a wonderful island palace located in the middle of breathtakingly beautiful Pichola Lake. This outstanding palace was built by Maharana Jagat Singh II in 1754. Emerging out of the gleaming blue water on the Pichola Lake creates a romantic ambience and never fails to impress its visitors. When you will come here to visit the Lake Pichola or the Lake Palace, you will experience why the city of Udaipur is called Romantic City. Don’t miss such awe-inspiring sights while you are in tours to Udaipur or tours to Rajasthan, India. 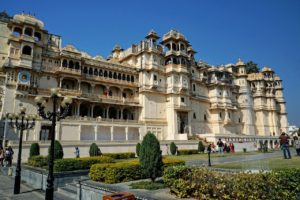 Jag Mandir: Besides Lake Palace or Jag Niwas, Jag Mandir is another beautiful island palace on breathtakingly beautiful Lake Pichola. This outstanding palace was built by Maharaja Karan Singh in the year of 1615 AD. During your visit to Jag Mandir, you will see a colossal statue of elephants and imposing cenotaphs which affix to its beauty.
Saheliyon-Ki- Bari: This beautiful garden was built in the 18 century. It was built as oasis for the royal ladies to spend their leisure time. A visit to Saheliyon-Ki-Bari provides you an opportunity to see beautiful lotus pool, enchanting fountains in the shape of birds, marble pavilions, flowerbeds, and the lush green lawns.
Apart from these attractions, Jagdish Temple, Fateh Sagar, Maharana Pratap Memorial, Rose Garden, Shilp Gram, Monsoon Palace, and Bhartiya Lok Kala Museum are also worth visiting attractions of Romantic City – Udaipur, Rajasthan, India.
How to Reach Udaipur:
By Air: Udaipur is well-connected by daily flights with Jaipur, Jodhpur, Delhi, Ahmedabad, Jaipur, Aurangabad and Mumbai. Udaipur Airport (Dabok Airport) is just 24 km from the main city.
By Rail: The city of sunrise – Udaipur is also well connected by rail from all the major cities of India. The city of Udaipur can be also covered by the prestigious Palace on Wheels train.
By Road: There is a good network of roads to arrive in the romantic city of Udaipur, Rajasthan, India.