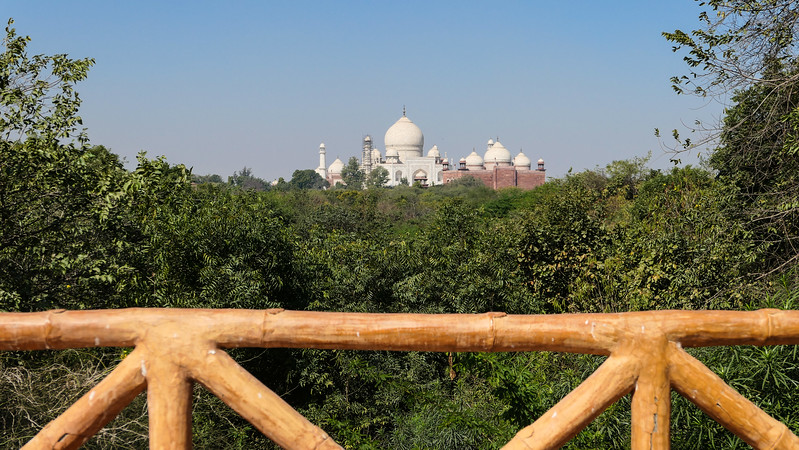 How to spend 03 days in Agra and see Taj Mahal from every angle!

We came to Agra for the same reason everyone else does: to see the Taj Mahal – the one attraction that sits at the top of every visitor’s Agra travel itinerary. This symbol of undying love is one of the seven Wonders of the Modern World and one of the most beautiful buildings in India, so like countless travelers before us, we too made the long journey to see it with our own eyes. (Spoiler alert: it lived up to every single expectation and then some!)

Since our month in India was all about travelling at a slow and leisurely pace, we gave ourselves three full days in Agra (we later learned that most people only stay a night or two!), and fortunately for us, that meant we got to see and do quite a bit around the city. Now here’s a look at how we spent our 3 days in Agra:

Agra Fort was the main residence of the Mughal emperors before they moved their capital to the Red Fort in Delhi, so if you’ve already been there on your travels through India, it’s kind of cool to see some of the similarities between the two structures.

Like the Red Fort in Delhi, Agra Fort is also a walled city and inside the enclosure you’ll find gardens, palaces, mosques, audience halls, and basically a maze of marble and red sandstone. If you’re interested in the history of the fort, you can easily hire a guide at the gates, however, it’s also the kind of place that you can enjoy on your own.

The cherry on top is that because Agra Fort is located just 2.5 kilometres from the Taj, you get some pretty cool views of it as well!

Admire the Baby Taj up close

Alright, so you’re not going to get any views of the Taj Mahal from the baby Taj, but if you’re already heading to Mehtab Bagh, this stop is right along the way.

The Baby Taj, whose real name is the Tomb of Itimad-ud-Daulah, is a mausoleum that was commissioned for Mirzā Ghiyās Beg; he was the grandfather of Mumtaz Mahal, the woman the Taj was built for.

The Baby Taj has been regarded as an early draft for the Taj, but I personally don’t see the resemblance – I think Humayun’s Tomb in Delhi offers a better representation of that! But what I can agree with is that the Baby Taj looks a bit like a jewelry box. From a distance the building may appear to be solid white marble, however, when you get up close you can see that it is covered in arabesques, geometric patterns, and colorful semi-precious stones!

Another place you should make time for in Agra is Mehtab Bagh, which also goes by the ever romantic name: Moonlight Garden.

Aside from offering a quiet respite from Agra’s busy streets, these gardens sit directly behind the Taj Mahal and right across the Yamuna River, which means that once again you get some postcard perfect views.

This location is really popular at sunset, and couples, families, and tour groups were already starting to gather across the lawn long before the sun went down.

Legend has it that Emperor Shah Jahan, who commissioned the Taj Mahal, had wanted to build a mausoleum of black marble for himself in these very gardens to mirror the Taj Mahal. As history would have it, Shah Jahan’s own son ended up throwing him in prison, which meant this plan never came to pass, but can you imagine what that would look like today?

Tip: Because Mehtab Bagh is located so close to the Yamuna River, it can partially flood during the rainy season. Something to keep in mind if you visit during that time of year.

Blog Refereed from The BackPackers.com