Top 15 fair and festivals in Rajasthan

Baneshwar Fair, Baneshwar (Jan-Feb.): Baneshwar Fair is a religious festival with simple and traditional rituals. This fair is predominantly famous among local people or tribal from the neighboring states of Madhya Pradesh and Gujarat. The festival is dedicated to Lord Shiva. 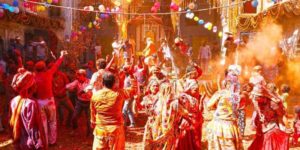 Camel Festival, Bikaner (January): Camel Festival is celebrated every year in the city of Bikaner with great enthusiasm. It is one of the most popular tourist destinations of Rajasthan, India. During this festival the city comes alive with folk dance, music and dance. The festival also provides opportunity to enjoy camel performance, camel race, camel dance, etc. 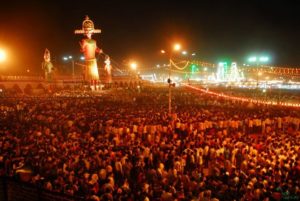 Dussehra Festival, Kota (October): Dussehra is a famous festival of Hindus and celebrated in all over India with great zeal and zest. But Dussehra in Kota has its own charm. The festival is celebrated on the tenth day of Ashvin. The festival of Dussehra is also known as Vijayadashmi. According to legend, this day Lord Rama (epic hero of Ramayana) returned his home Ayodhya after the victory over demon King Ravana.

Elephant Festival, Jaipur (March-April): Elephant Festival is also an important festival of Rajasthan which is celebrated with great zeal and zest in the capital city Rajasthan – Jaipur. Become a part of this interesting festival and enjoy various elephant sports. 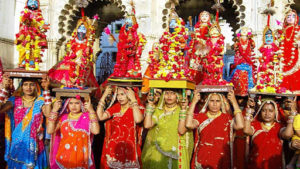 Gangaur Festival: The Gangaur Festival is one of the most important and colorful local festival of Rajasthan, India. The Gangaur Festival is an auspicious and one of the most important & colorful festivals cerebrated in the state of Rajasthan, India. This auspicious festival is celebrated with great zeal and devotion particularly in the city of Jaipur – the capital of Rajasthan, India. This auspicious festival of Rajasthan is celebrated in the honor of Goddess Gauri and her consort Lord Shiva. During this festival, Goddess Gauri (also known as Parvati) and the Lord Shiva are worshiped. The word Gangaur is made from two words “Gana” and “Gaur”. ‘Gana’ represents Lord Shiva and ‘Gaur’ represents ‘Gauri or Parvati’.
This festival begins on the first day of Hindi month – Chaitra, a day after Holi. This is the 18 day long festival and celebrated with great dedication and devotion particularly by womenfolk. Both married and unmarried women celebrate this festival with great fervor and devotion. Married women worship for welfare and long life of their husbands. Unmarried young girls worship for having good, loving and caring husbands. Young girls as well as married women dress themselves in their best clothes and jewelry to participate in this auspicious festival. Young girls and women beauty their hand and feet by drawing stunning designs with Menhadi.
Apart from its religious significance, its major attraction are its procession. In Jaipur – the Pink City, the procession & demonstration starts at Tripolia Gate and passes Chaugan to Trlkatora. Gheewar, a mouth-watering sweet, is most popular dish of this festival. Sweets dishes are distributed among friends and relatives. Besides Jaipur, this auspicious festival is also celebrated with full dedication and devotion in the cities like Bikaner, Nathdwara, Jodhpur and Udaipur.
How to reach Gangaur:
By Air: The Pink City of Jaipur is well connected by air from major cities of India.
By Rail: Jaipur is well-linked by train with all the major cities of India.
By Road: Jaipur has a good network of road and well-connected from all the major cities of India. 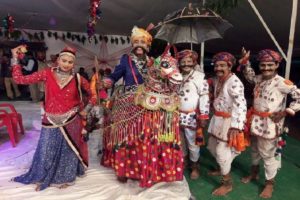 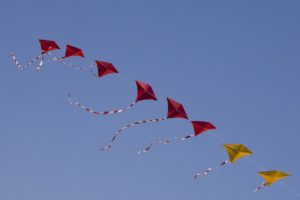 Kite Festival (held on 14th Jan of every year): Kite Festival of Rajasthan is one of the most fabulous festivals celebrated in India. It is festival with a difference. On the day of Kite Festival, the sky all over Rajasthan fills with colorful and designer kites. In the evening, kites with lights in them and fireworks brighten the skies above and create a stunning view which is worth visiting. Predominantly this festival is celebrated in the city of Jaipur and Jodhpur. 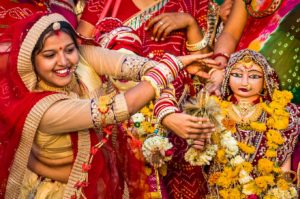 Mewar Festival: Top India Trips offers a dazzling opportunity to the tourists who want to be delighted by the sagas, myths and tourist attractions of medieval and period traditional panoramas. Fairs and festivals in the country of India are a fascinating blend of visual marvels with the Mewar Festival gripping a pleasure and self-importance of place in the itinerary. Mewar festival is one of the much talked fairs & festivals in the desert state of Rajasthan, India. The Mewar Festival of Rajasthan, India provides a brilliant opportunity for sightseeing and recreational activities.
Visiting Mewar Festival includes a tour to Udaipur – the city of sunrise. This fascinating festival of Udaipur (also known as the Romantic City or the City of Lakes), Rajasthan is celebrated to welcome the arrival of spring (the King of Seasons). This festival overlaps with Gangaur Festival in the city of dawn, Udaipur, Rajasthan, India. The festival has its own charm and never fails to impress its visitors. The festival of Gangaur is very popular festival in the state of Rajasthan, India and it is celebrated with great dedication and devotion by womenfolk. During this festival women and maiden girls of Rajasthan dress themselves in their best clothes and beauty their hands and feet by drawing stunning design with Menhdi paste. Gangaur Festival is dedicated to Goddess Gauri, the spouse of Lord Shiva. In this auspicious festival Goddess Gauri or Parwati and Lord Shiva are worshiped. Women worship for well being and long life of their husbands. Unmarried young girls worship for having good, loving and caring husbands.
The Mewar Festival of Udaipur, like other fairs and festivals of Rajasthan, is full of fun & folic. Like other fairs and festivals of Rajasthan, India the major attraction of Mewar Festival is its procession. Enjoying in whole city of Udaipur, the procession ends at the Gangaur Ghat at Lake Pichola. Here, the images of Gauri and Shiva are shifted to the special boats amidst a gala celebration like singing religious songs and dancing. After ending of religious part of this festival, begins the cultures events. During this festival one can enjoy cultural events, like songs, dances, other programs. The Mewar Festival ends with an exciting fireworks display.
The Mewar Festival of Udaipur is a festival which is worth visiting and not to be missed. If you have really planned to be a part of the fascinating Mewar Festival, the most important thing is to know the exact time of the festival. The Mewar Festival coincides with the Gangaur Festival. This festival begins on the first day of Hindi month – Chaitra, a day after Holi.
Besides Mewar Festival and Gangaur Festival of Udaipur, the city also offers a brilliant opportunity for exploring various magnificent forts, elegant palaces, museum, havelis, breathtakingly beautiful lakes, and other cultural and historic tourist attractions. Welcome to Udaipur, the city of lakes. Come and become a part of Mewar Festival and Gangaur Festival.
How to reach Mewar:
By Air: Udaipur is well-connected by air from all the major airports of India.
By Train: Udaipur, the city of sunrise, is well-linked by a good railway network from all the major cities of India.
By Road: The city of lakes, Udaipur is also easily accessible by roads from all the major cities of North India. 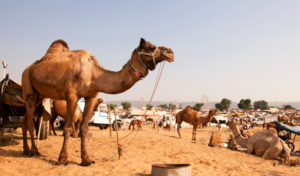 Nagaur Fair, Nagaur (Jan-Feb.): Nagaur Fair is predominantly a cattle fair which provides an opportunity to participate in some of the local sports. This fair shows rich Rajasthani culture. 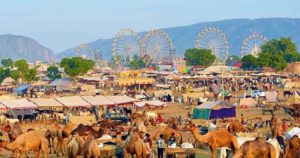 Pushkar Fair, (November): Top India Trips offers a brilliant opportunity to become a part of one of the most important and popular fairs and festivals of Rajasthan, India. A large gathering of tourists from all over the world come to Rajasthan, India to become a part of this festival. During this exciting festival you will face to face the vibrant and colorful culture of Rajasthan, India. Yes, this is the world famous Pushkar Fair & Festival. Pushkar Fair & Festival is celebrated every year during the months of October – November in the holy city of Pushkar in Rajasthan, India.
At first we are describing about some major facts of this little but beautiful city of Pushkar, Rajasthan, India. Pushkar is a city which is famous for its religious significance. Pushkar is the city is which is globally famous for its amazing camel fair and festival. There is a holy lake in the holy city of Pushkar which is also a major tourist attraction. Pushkar is a city which is famous for its Brahma Temple (according Hindu mythology Lord Brahma is considered to be as the creator of the universe). Pushkar is a city which is so sacred that no meat, fish, eggs and alcohol is allowed within the city. Really it is a fascination city.
If you have really planed to visit the sacred city of Pushkar in Rajasthan, India you must visit this city during the festival season. The Pushkar Camel Fair offers a brilliant opportunity to peek the affluent culture of the region. During this festival you will enjoy folk dance, folk song, folk music and folk drama of this region which all are very mesmerizing and unforgettable experience. Camel trading, camel races and local bazaars are also the major attraction of this exciting festival.
The Pushkar Fair and Festival also offers a glorious opportunity for shopping activities. During festival you can purchase exquisite handicrafts, beautifully carved furniture, Rajasthani Jewellery and many more. Welcome to Pushkar. Come and enjoy this fascinating fair & festival with Top India Trips. Don’t miss to travel in Pushkar during Pushkar Fair & Festival. To arrive in Pushkar, one has to arrive in Ajmer, the city famous for Dargah, in Rajasthan India. Ajmer is base to visit Pushkar. Pushkar is also accessible from the city of Jaipur, Rajasthan, India. Jaipur is well-connected by air, rail and road. 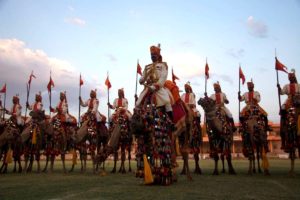 Summer Festival, Mt.Abu (June): Summer Festival is celebrated in the month of June with great zeal and zest in the only hill station of Rajasthan, India. Mount Abu is the coldest place of the state and famous for Dilwara Jain Temples and cool surroundings & natural beauty. 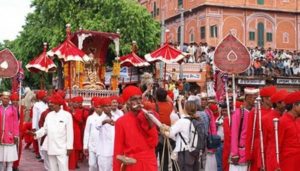 Urs Ajmer Sharif, Ajmer (According to Lunar Calendar): This festival is a religious festival and celebrated in the memory and honor of Muslim Sufi Saint Khawaja Moinuddin Chisti. All of Ajmer seems to take on a festive air and several programmes are organized to mark the festivals.