In a vast state like Uttar Pradesh, for the convenience of tourists, we have Best tourist circuits of Uttar Pradesh that has been created according to different interests. In the tourism circuit, you can easily select best travel circuits according as per your interest.Each tourism zone has been prepared in such a way that cultural, historical and natural information of a particular area is easily available during the tour.Tourists coming to Uttar Pradesh can make your program by connecting to these circuits of your choice to have wonderful trip to Uttar Pradesh with your family or friends.

Travel to Buddhist Circuit: Gautam Buddha is said to have spent a lot of his life in this circuit. The Buddha traveled widely and attained enlightenment and spread his messages far and wide and finally attained Mahaparinirvana in the region.The grand stupa, ancient monasteries, meditation and worship among Buddhist mantras in the circuit are a supernatural experience for Buddhist pilgrims.Buddhist devotees can experience the entire life of Lord Buddha in Uttar Pradesh. Such an experience is not possible anywhere else. If you want to learn in life by introspection, then this circuit is the most suitable place for you.

Kapilavastu: Prince Siddhartha had a childhood here and is considered holy for this reason. It is currently identified as Pipharwa Township in Siddharthnagar district. It can be experienced here thousands of years ago, when the young prince Siddhartha sacrificed all earthly riches and pleasures in search of salvation.

Kaushambi: Buddha gave many sermons at this place about 60 km from Prayagraj. It is famous as a center of higher education for Buddhists. It is considered one of the most prosperous cities of the time. During the excavations, a large number of statues, coins and terracotta objects were found besides the ruins of an Ashoka pillar, an old fort and a grand monastery.

Sarnath: At this place, just 10 km from Varanasi, Lord Buddha gave his first sermon after attaining enlightenment. The great Dhamek Stupa and its ruins still remind us of the Buddha’s teachings. The luminous pillar erected by Emperor Ashoka in 273–232 BCE is a symbol of the foundation of the Buddhist Sangha. The lion above this pillar has been adopted as the national symbol of India.

Sankisa: It is believed that Lord Buddha descended here after addressing his mother in heaven. It is connected with Basantpur village on the banks of river Kali in Farrukhabad district. Emperor Ashoka built a pillar here to mark this holy place.

Shravasti: Just 15 km from Bahraich, this place has many preserved stupas and ruins. In ancient times, it was the capital of the Kosala kingdom and here Buddha demonstrated his divine powers to impress those who did not believe in him. It is believed that it was founded by the legendary king Shravasta. Here Buddha spent 27 years of his life.

Kushinagar: The Buddha breathed his last at Kushinagar, about 50 km from Gorakhpur. There is a huge statue of Buddha found during the excavation in 1876 in the Mahaparinirvana temple. Excavations at Kushinagar also reveal that there was a large community of monks in the 11th century. 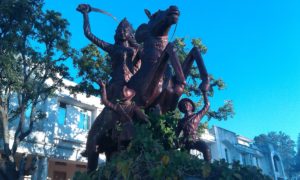 The magic and charm of Bundelkhand continues even today. It is a wonderful experience to visit the rugged palaces and forts for the people visiting here. Bundelkhand is certainly a silent witness to a glorious era. By visiting here, you will hear stories of such valor and valor that will be remembered by you for a long time.

Bithoor: It is a small temple town on the outskirts of Kanpur, on the banks of the Ganges. A quick trip can be made around the Valmiki Ashram, Brahmavart Ghat, Dhruva Tila and Nana Saheb’s palace. It is a different experience to see the spectacular view of the sunrise and sunset in the Ganges.

Chitrakoot: Lord Rama spent his years of exile here, due to which this place is important in Hindu mythology and Ramayana. This holy city along the Mandakini River extends to Uttar Pradesh and Madhya Pradesh. Visitors reach Chitrakoot and experience immense mental peace. Hanuman Dhara, Kamad Giri, Sphatik Shila and Ram Ghat are the places to see here.

Jhansi: Jhansi is known for its stories of valor and courage. It is the gateway to the legendary Bundelkhand region. The city is associated with the name of Rani Laxmibai of Jhansi, who led the freedom fighters at the age of 22, taking a front against the British. Along with the fort of Jhansi, many temples and lakes are also worth seeing in this city.

Kalinjar: Located around 280 km from Jhansi, close to Banda, this fort had strategic importance during the medieval period. The construction of Kalinjar Durg, situated at an altitude of 700 feet, is very effective. A visit to the picturesque Vindhya ranges will be memorable for you for a long time. It is said about the Neelkanth temple that it is built at the place where Lord Shiva rested for some time after drinking the poison that emerged from the ocean churning.

Mahoba: This small town is known for its lakes and temples situated on the hills and valleys. The impregnable hill forts and man-made lakes by the Chandel kings are unique examples of engineering. Tales of the heroism of Bundela warriors can be heard in the songs of Alha-Udal. Granite structure is a qunique structure of 9th century of The Sun Temple at Rahila. Its original architecture is like the temples of Khajuraho. 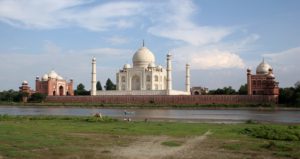 This ancient land is an unbreakable part of the life of Lord Krishna. Song, music, harmony and art dwell in the history and legends of the region. The visit to temples and monuments in Braj is equivalent to traveling directly to history. It has been the region of the former great empire of Mughal kings.

Agra: Agra is the capital of the erstwhile Mughal Empire and the city of the Taj Mahal. In the history book, this city is recorded for marble monuments. The architecture of Agra Fort and Fatehpur Sikri will surprise you. A trip between Gulzar Bazaar and gardens with arts and crafts will be a memorable experience. A visit to Agra, a few blocks away from New Delhi, is like traveling to history.

Mathura: Mathura and Vrindavan are twin cities of Braj Bhoomi. Every day there is a different experience between the legend, music, and dance of Lord Krishna in temples. Charkula Dance, Rasleela and the famous Mathura Museum will be a special attraction of the region for tourists.

Vrindavan: This is the place where Lord Krishna performed the flute and performed Raslila. This place is immortalized in the poems of Meerabai, Surdas and Vallabhacharya. The Rangaji Temple, a blend of Rajput and South Indian architecture, is the largest temple dedicated to Lord Vishnu. Banke Bihari Temple, Radha Madhav Temple and ISKCON Temple are examples of great architecture. 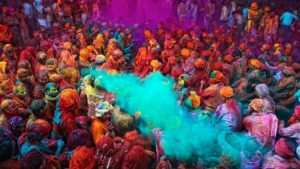 The region is known worldwide for peace, harmony and skill. It is located in the heart of Uttar Pradesh. The region has a global identity for its culture, food, literature and spirituality. The monuments, spiritual sites and natural sites of Awadh will remain in your memory for a long time.

Deva Sharif: Located about 25 km from Lucknow, this shrine is associated with Sufi saint Haji Waris Ali Shah. People of all communities come to this shrine with reverence. An annual Deva fair is held here in November, which is a perfect example of universal brotherhood.

Naimisharanya: It has been an important pilgrimage center for Hindus since the Vedic period. Chakra Tirtha, Vyas Gaddi and Suraj Kund are places of worship and symbols of ancient architecture.

Ayodhya: Ayodhya is an important pilgrimage center, famous as the birthplace of Lord Rama. In Ayodhya, the city of temples and mosques, people of every religion live in harmony and brotherhood. Ramkot, Hanumangarhi, Kanak Bhavan and Suraj Kund are the famous pilgrimage centers here. There is a feeling of lively spiritual experience at the ghats of Saryu. Ayodhya was formerly the capital of the Nawabs of Awadh. 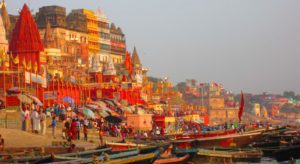 The oldest cities Varanasi in the world. Located on the banks of the Ganges, this city is a sacred place for Hindus, Jains and Buddhists. The Vindhya range of mountains extends to the states of Uttar Pradesh, Madhya Pradesh and Chhattisgarh. This region not only has religious and spiritual significance, but it is also rich in mineral wealth.

Varanasi: Traveling to this great city will always be included in your most memorable visits. The experience of watching Ganga Aarti in the evening is a wonderful adventure. Banarasi silk sarees and carpets have made Varanasi a big name in the global markets. A morning spent in the Ghats and temples provides a different spiritual experience.

Chunar: About 40 km from Varanasi, this place is a unique blend of religion, history and nature. It is an ideal place for a day trip. The magnificent Chunar Fort on the banks of the Ganges offers a wonderful view.

Vindhyanchal: It is a sacred pilgrimage site situated on the banks of the Ganges near Mirzapur among the Vindhya hills. Shaktipeeth of Goddess Vindhyavasini is considered to be the abode of divine power and blessings. 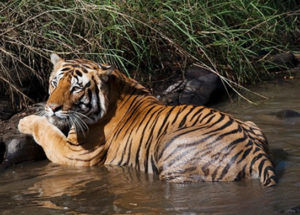 The Terai region is one of the most picturesque biosphere reserves in Uttar Pradesh. Its lush green area is a natural home for wildlife. For nature lovers, seeing tigers, elephants, deer, crocodiles, dolphins, excellent species of birds and dense vegetation is like a dream come true.

Dudhwa: This national park is home to various species of deer, elephants, tigers, leopards and birds. It is a perfect place to spend some time with natural peace in the lowland foothills away from the hustle and bustle of the cities. The rivers flowing amidst the deep green forests give you a full feel of the forest.

Pilibhit: The Pilibhit Tiger Reserve is located in the Lakhimpur-Kheri and Bahraich districts and plains of the Terai on the Indo-Nepal border in the foothills of the Himalayas. It is one of the tiger conservation sanctuaries of India and is part of the campaign to preserve the existence of tigers. More than 127 animals, 556 species of birds and 2100 flowering plants are found here.

Katarnia Ghat: The Katarnia Ghat in Bahraich district is 200 km from Lucknow. Dolphins are found in the fresh water of the Girwa River. Apart from tiger, leopard and deer, many wildlife lives here.